Who is Tatiana Maslany, the new star of She-Hulk? 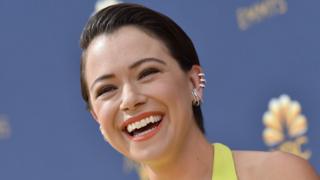 Maslany's acting chops are well-documented - she won her 2016 Emmy for starring in five seasons of BBC America's TV show Orphan Black, as more than a dozen clones of a woman trying to escape her past.

This is her first big foray into superhero territory though, introducing fans to a character not everyone will be familiar with.

She-Hulk's human alter-ego is lawyer Jennifer Walters, who also happens to be the cousin of Bruce Banner, better known as Hulk.

Created by Lee and artist John Buscema, she first appeared in The Savage She-Hulk comic in 1980.

Marvel's YouTube channel calls Jennifer a "bad-ass lawyer breaking glass ceilings and a lot more". But after being shot, a life-saving blood transfusion from Bruce transforms her into a "giant, green rage monster".

The diluted dose of gamma-filled blood gives her a milder version of Hulkiness, so Jennifer learns to "keep her calm and her smarts while in Hulk form", unlike her cousin.

She-Hulk is arguably a more entertaining character than Hulk - Marvel.com says she "backs up her sensational strength with her savage wit and confidence", while Hulk is famously toddler-like, typified by phrases like "Hulk smash!".

Having calmed her inner green monster, Jennifer moves to New York to work with the Avengers and her friends the Fantastic Four, tackling supervillains and fighting crime in court - rarely returning to her human form.

She also finds time for the odd romance, notably with Thor, who presumably wasn't intimidated by her physical prowess.

The news was welcomed by Mark Ruffalo, who plays the Hulk in the Avengers films.

Who is Tatiana Maslany?

The Canadian actress, 34, found an early love of acting, appearing in local productions as a young child and working in professional TV shows while in secondary school, including Canadian children's television series 2030 CE (2002-03).

Maslany also got noticed at the Sundance film festival that year, winning the breakout performance prize for the film Grown Up Movie Star, playing Ruby, aged 13, who has to survive life with her rural father after her mother runs away to become an actress.

In 2013, Maslany wrote a blog for the BBC about Orphan Black, where she said playing scenes with clones of herself was "one of the biggest challenges I've faced as an actor".

"I look insane when we shoot those scenes because ultimately I'm on an empty set talking and reacting to nothing. It's very much about imagination," she wrote.

"At the same time it's a highly technical process because I have to hit certain marks and my eyes have to be focused in the right place in order for the special effects to layer in seamlessly."

Such work on set should stand her in good stead for working on a superhero series, which will no doubt involve plenty of green-screen and CGI work.

The actress's other work includes a key role as Sister Alice McKeegan in HBO/Sky Atlantic's series Perry Mason, as well as TV series BoJack Horseman in 2015 and a couple of 2013 episodes of Parks and Recreation.

Why haven't we seen much of She-Hulk before now?

Until now, She-Hulk has never taken off in the same was as Hulk, who has enjoyed his own cartoon series, TV series, and of course various films, most successfully played on the big screen by Ruffalo in the Avengers universe.

She had a brief appearance in the cartoon, in 1983 in an episode called Enter: She Hulk, but the character didn't really take off, leaving the main stage at the time to DC's Wonder Woman TV series.

Efforts to include She-Hulk in a Hulk film starring the original TV star Lou Ferringo never materialised, and nor did a She Hulk TV show.

Although a film in 1991 was going to star Brigitte Nielsen in the main role, this also never got past the promotional shots.

Image copyright Kobal/Shutterstock Image caption Brigitte Nielsen as She-Hulk in 1991... but it never made it to the big screen

There isn't much documentation around as to why She-Hulk didn't make it properly onto either the small or big screen. It could have been down to a lack of financing or simply not enough popularity for the character.

But things have changed.

The huge recent success of Marvel's Avengers, and female characters including Captain Marvel, Wonder Woman, and Black Widow, has had an impact.

There has also been the big success of Netflix's Marvel series Jessica Jones, first released in 2015. It was cancelled last year after five series, making way for new characters such as She-Hulk.

A second Wonder Woman film starring Gal Gadot is due to be released, along with an upcoming Black Widow film starring Scarlett Johanssen. There is also the possibility of a female Thor film starring Anne Hathaway in 2020 called Thor: Love and Thunder.

So the way is most definitely being paved for what Disney+ will certainly hope will be great success for She-Hulk, assuming she manages to keep her temper.