Succession: What's the big deal about the Emmy-winning drama? 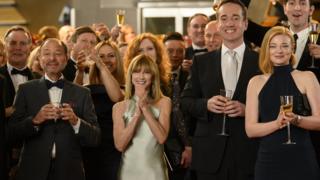 HBO drama Succession won big at this year's Primetime Emmys, picking up prizes for acting, writing, directing and best drama. What's the secret of its success?

After the hugely successful Game of Thrones concluded last year, Emmy voters knew they had to do some Succession planning.

HBO's fantasy series had dominated the ceremony for some time, winning the night's top prize - best drama series - in four out of the last five years.

But after its final season in 2019, something had to take its place on TV's biggest night of the year. And Succession has been patiently waiting in the wings for its moment in the spotlight - just like some of its characters.

The US series follows Logan Roy (played by Brian Cox), the ageing CEO of a huge media and entertainment company, and his four children - three of whom are desperate to be named his successor.

For a show that inspires such a dedicated following, however, there's something rather unusual about it: you won't like any of the characters.

"I hate everyone on Succession and I can't stop watching," wrote Elle's EJ Dickson after it launched.

So why has it become so popular?

Firstly, if you're going to watch Succession, you need to adjust your brain slightly to its tone.

In the same way that you have to tune your ear to the Baltimore accents of The Wire, or get used to the sheer speed of dialogue in The West Wing, Succession has its own economy of style.

Its tone is unrelentingly cynical and sardonic, as the Roys constantly undermine and verbally abuse each other. The kids are entitled and cunning, as are many of their other halves, who are equally keen to join and ascend the company hierarchy.

Its dark sense of humour is part of its appeal in the woke landscape of entertainment, and the main characters are people you love to hate.

"Here's the thing about being rich: it's [expletive] great," explains Matthew Macfadyen's Tom Wambsgans in one of the show's most famous speeches. "It's like being a superhero, only better.

"You get to do what you want. The authorities can't really touch you. You get to wear a costume, but it's designed by Armani."

The characters don't particularly care about each other's feelings, or the well-being of the company's employees. Instead they focus their attention on money, their own careers, avoiding bad media coverage and passing the buck when something goes wrong.

Lives and careers are ruined amid a cut-throat environment, yet everything happens amid a sense of farce.

"Succession has the ability to combine wildly disparate elements without them ever undermining each other," wrote James Walton in The Spectator.

The Guardian's Tim Dowling said: "The writing is savage, the dialogue sharp and foul-mouthed. Although funny in places, it is also scary, as any drama peopled by monsters ought to be."

However, as Variety's Daniel D'Addario noted: "Its pulpy willingness to be its silliest self can be great fun, but can also transport a show that often tries to say something real about the hazards of generational wealth into too-easy comedy, or fantasy."

Is it based on the Murdochs?

Read any interview with the show's stars or creator Jessie Armstrong, and you'll find them acknowledging similarities but largely playing down this suggestion.

There are parallels, no doubt. Rupert Murdoch also owns a global media company - and has multiple children (particularly James, Elisabeth and Lachlan) who have each been tipped as his successor at one time or another.

But then there are several other families who have a similar dynamic.

"The amazing thing about this stuff is that it's everywhere," Armstrong told the New York Times last year. "Sumner Redstone's family. The Mercers. The Murdochs. Conrad Black.

"Sometimes people have said, 'It's really about these people, isn't it? It's based on them.' And: No. We read widely and we do take elements of stuff."

Few members of the Murdoch family have publicly commented on Succession, and James Murdoch says he has never seen it. However, Brian Cox recently told the Hollywood Reporter about a chance encounter with a member of the family in London.

"I was in my favourite café in Primrose Hill," the actor recalled. "And this guy said 'We're really liking the show... but my wife finds it a little hard to watch sometimes.'"

Cox thanked him for the compliment but asked why his wife was less keen. The man replied: "Well, I'm married to Elisabeth Murdoch."

Why all the Emmys?

The Emmys have developed a reputation for rewarding the same shows year after year. Mad Men, Veep, Modern Family and 30 Rock are among shows which have dominated the top categories in the last couple of decades.

But the success of Schitt's Creek and Succession this year has freshened up the ceremony.

One major factor was the absence of Game of Thrones, which allowed Succession to step forward and pick up some of the major prizes.

It also feels like the Emmys are making up for lost time. The first series took home just one award, for writing, at last year's ceremony.

By the time the awards took place, the second season was already airing to huge critical acclaim. But it couldn't be nominated until this year, due to the eligibility window.

"The calendar just screws it up," explained Vanity Fair's Christopher Rosen. "The Emmys are playing catch-up here, to reward Succession for a second season which was airing during last year's Emmys."

In the meantime, Succession has been winning some major awards at other ceremonies - including January's Golden Globes, which saw Cox win best actor in a drama series.

All of which means the Emmys likely felt that some recognition for Succession was well overdue.