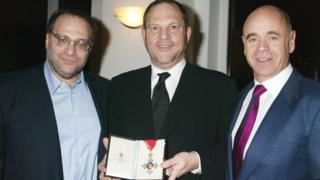 Disgraced movie producer Harvey Weinstein has been stripped of his honorary CBE following his conviction for rape and sexual assault earlier this year.

An official announcement in The London Gazette confirms that the Queen has annulled his appointment as a Commander of the Order of the British Empire.

The decision was made at a recent meeting of the Honours Forfeiture Committee, which is independent from government.

Weinstein was sentenced to 23 years in prison in March. It followed an investigation by the New York Times in Oct 2017 that published accusations from several women that the now 68-year-old producer had abused or harassed them.

Weinstein was awarded the CBE in 2004 for services to the UK film industry.

Its removal follows the 2017 rescinding of the Fellowship he received from the British Film Institute (BFI) in 2002.

The Honours Forfeiture Committee meets when required to consider whether recipients are guilty of behaviour "deemed to bring the honours system into disrepute".

Those from whom it has stripped honours in the past include entertainer Rolf Harris, who lost his CBE in 2015 after being jailed for 12 indecent assaults the previous year.

In 2012 Fred Goodwin, the former chief executive of the Royal Bank of Scotland, had his knighthood removed due to his role in the collapse of the bank.

Weinstein faces further criminal charges for rape and sexual assault in Los Angeles, though extradition proceedings were put back to December last month due to the coronavirus pandemic.

It's unsurprising that Harvey Weinstein, once one of Hollywood's most powerful figures, has finally been stripped of an honorary award from the Queen.

His exposure as a prolific predator shocked the world and added global momentum to the already existing MeToo movement.

However as the first public allegations were made almost three years ago, many will be disappointed that the removal of his CBE has taken this long.

For obvious reasons, the workings of the Honours Forfeiture Committee are secret and confidential.

But the committee's publicly published criteria for the rescinding of an honour include cases where an individual has been convicted of a criminal offence and sentenced to more than three months in prison.

That means that when criminals charges or a trial are likely or pending, the committee is understandably reluctant to take action until that process is complete, however overwhelming the evidence or public opinion may be.

Although the committee was almost certainly reluctant to take action while a legal process was underway, it could not have been unaware of the revulsion many felt at Weinstein still continuing to hold an honour at this time.

While many individuals and bodies wrote to the Prime Minister demanding the revocation of Weinstein's CBE, the removal of an honour is actually a decision that's independent of the government and Downing Street.

It's also worth noting that a case as high profile as Weinstein's was always going to be on the Forfeiture committee's radar, with or without calls from the public or MPs. And that the decision to strip the former of the film producer isn't in direct response to these demands.

As soon as the Weinstein accusations became headline news, the committee will have known they would be at some point be considering whether or not there was clear, unambiguous evidence that he'd brought the honours system into disrepute.

However many will believe that the committee should have been poised to make a speedy decision and send a swift signal once he was convicted in February. And will feel that even with a system slowed by Covid, that it still shouldn't have taken more than six months to rescind the CBE of a convicted sex offender.