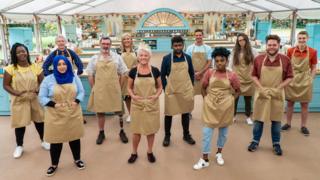 A Samaritan, a student and a pantomime producer are just three of the contestants hoping to win this year's Great British Bake Off.

The show will return to Channel 4 on 22 September after filming was delayed because of the coronavirus pandemic.

This year's line-up consists of 12 contestants - one fewer than the baker's dozen who competed last year.

Paul Hollywood and Prue Leith will be on hand to judge the best bakes in the famous white tent.

The bakers were selected by April, but coronavirus restrictions meant the filming schedule had to be rewritten, and the series will reach screens a month later than usual.

The show is normally filmed over three months, largely at weekends. However, this year the producers asked the contestants to take six weeks off work and stay in a secure filming location.

"Everything was complicated, everything was different, but everybody wanted to do it," executive producer Kieran Smith told the Radio Times.

Down Hall Hotel in Essex was chosen as the show's new base, housing the production team, bakers, hosts, judges, hotel staff and cleaners all together, with extra temporary accommodation set up in the car park.

Image copyright Channel 4 Image caption Left-right: Dave, Hermine, Laura and Linda Dave is a 30-year-old armoured guard from Hampshire. He likes to get his bake on once a week while listening to punk rock music, and has a penchant for pretzels and baguettes. When he's not baking, Dave's other interests include cars and taking his dog and cat for a walk. Dave said he met new host Lucas during the first week of filming and realised that "he was as nervous as I was". Accountant Hermine was born and raised in Benin, west Africa, and moved to London in 2001 to study. The French influence in the country has instilled a love of high-end patisserie in the 39-year-old. Her laugh is described as "infectious". Laura, 31, is a digital manager from Gravesend, Kent. She specialises in decoration, and thinks her organised nature will lend itself to the show. She loves musical theatre - both performing and watching - and is also a volunteer for the Samaritans. Retirement living team leader Linda, from East Sussex, discovered her passion for baking during her frequent childhood visits to her aunt's dairy farm. To this day, the 61-year-old buys home-grown produce from another aunt's fruit farm and uses it to bake it her signature sausage rolls. Image copyright Channel 4 Image caption Left-right: Loriea, Lottie, Makbul and Marc Loriea is a diagnostic radiographer from Durham. The 27-year-old uses baking as a means to celebrate her Caribbean roots. She moved to the UK from Jamaica when she was 15, but began baking as a kid with her grandmother. Her husband especially loves her Jamaican patties. Pantomime producer Lottie says baking is in her blood, and when she was little she watched cooking shows rather than playing with her toys. The 31-year-old from West Sussex describes herself as "a perpetually frustrated perfectionist". Makbul is a 51-year-old accountant from Greater Manchester. The self-taught baker first took on cooking at home as a means to help support his mum. He has a remarkable ability to measure out ingredients by eye, and enjoys making traditional Asian nankhatai biscuits. Bronze resin sculptor Marc lost his leg in a motorbike accident in 2016, which led him to baking bread as a form of therapy. The 51-year-old from Leicester, who now lives in Cornwall, is a single parent and decided to enter Bake Off to show his daughters that one can overcome life's obstacles. Image copyright Channel 4 Image caption Left-right: Mark, Peter, Rowan and Sura Mark is 32-year-old public health project worker from Northern Ireland, who now lives in Liverpool. He fell in love with baking at a pie shop in Edinburgh, which he visited every day while at university. His style is influenced by his Irish heritage, but also by the flavours of Africa and Asia, which he travels to regularly for his job. Accounting and finance student Peter grew up feasting on his mum's home cooking in Edinburgh. But it was actually Bake Off that inspired the 20-year-old badminton international to start baking for himself. He's likes to include Scottish ingredients like berries, whisky, oats and honey whenever he can. Rowan, 55, from Worcestershire, is a music teacher. He calls his baking style ostentatious but, he hopes, tasteful. The fitness enthusiast enjoys decorating his bakes with flowers (preferably edible ones) using what is in bloom in his garden. Last but not least, pharmacy dispenser Sura grew up with influences from Turkey, Iraq, Iran, Syria and India in her heritage. The 31-year-old lives in London with her husband and grandmother, and loves experimenting with ingredients and flavours from around the world.

The show's spin-off, The Great British Bake Off: an Extra Slice - presented by Jo Brand - begins on channel 4 on Friday 18 September.