Here's the timeline for Barrett's Senate confirmation, according to the Judiciary Chair

Graham said in an interview with Fox Business's Maria Bartiromo that confirmation hearings for Barrett would begin on Oct. 12 with an introduction day.

After that, there will be two days of questioning, and on Oct. 15th, the committee will begin its markup.

They will hold a committee vote to send her nomination before the entire chamber on Oct. 22.

Last night on Fox News, Graham said the committee would vote on Barrett's nomination by Oct. 26.

President Trump arrived at Trump National golf club in Sterling, Virginia at just after 10 a.m. today, according to pool reports.

The President's trip comes a day after he announced he's nominating Judge Amy Coney Barrett to the Supreme Court.

As Trump arrived at the golf club, there was a woman dressed in a "Handmaid's Tale" costume with a sign that said "VOTE" and a large crowd right near the entrance of the club with a sign that read “204k.”

More than 204,500 people have died from coronavirus in the US since the pandemic began, according to Johns Hopkins University's latest tally.

There were a few Trump supporters as well although only a fraction of the crowd, per CNN's Allie Malloy.

Jill Biden: Under Joe Biden, "we have calm. We have steady leadership."

Asked about President Trump's refusal to commit to a peaceful transfer of power should he lose the election, Jill Biden said her husband, Democratic presidential nominee Joe Biden, will bring "calm" back to the US.

"This is Donald Trump's America. this is the chaos," Biden said in an interview with CNN's Jake Tapper.

"We go back to Joe Biden, we have calm. We have steady leadership," she added. "We don't have all of this chaos in America."

Some background: Earlier this week, Trump would not commit to providing a peaceful transition of power after Election Day, lending further fuel to concerns he may not relinquish his office should he lose in November.

"Well, we're going to have to see what happens," Trump said when asked whether he'd commit to a peaceful transition, one of the cornerstones of American democracy.

Trump has previously refused to say whether he would accept the election results, echoing his sentiments from 2016. And he has joked — he says — about staying in office well past the constitutionally bound two terms.

Jill Biden: "We should have a Commander in Chief who supports our military family"

"If it is true, it's pretty heartbreaking," she said in an interview with CNN's Jake Tapper. "We should have a Commander in Chief who supports our military family, as Joe says it's our one sacred obligation to take care of our military and their families."

What this is about: Earlier this month, a report in The Atlantic magazine cited sources who said Trump rejected the idea of a visit to Aisne-Marne cemetery in France to commemorate the 100th anniversary of the end of World War I. He and proceeded to refer to the fallen soldiers as "losers" and "suckers," according to the sources.

Trump has forcefully denied the report in The Atlantic.

Pelosi says "it doesn't matter" that Judge Barrett is Catholic

House Speaker Nancy Pelosi said "it doesn't matter" that Judge Amy Coney Barrett is Catholic this morning on CNN's State of the Union.

Pelosi, who is Catholic herself, was asked by CNN's Jake Tapper if she thinks it's appropriate for Democratic senators to ask Judge Barrett about her Catholic faith.

Pelosi said, "I think it's appropriate for people to ask her about how faithful she would be to the Constitution of the United States, whatever her faith."

She continued: "It doesn't matter what her faith is, or what religion she believes in. What matters is does she believe in the Constitution of the United States. Does she believe in the precedent on the Supreme Court that has upheld the Affordable Care Act? This is, again, directly related to a major concern of the American people, as it was in 2018."

Some context: In 2017, Democrats were criticized for questioning how Judge Barrett's Catholic faith influences her views from the bench. California Sen. Dianne Feinstein told Barrett at the time "the dogma lives loudly within you."

Pelosi: Trump is "in such a hurry" to fill Supreme Court seat because of pending health care case 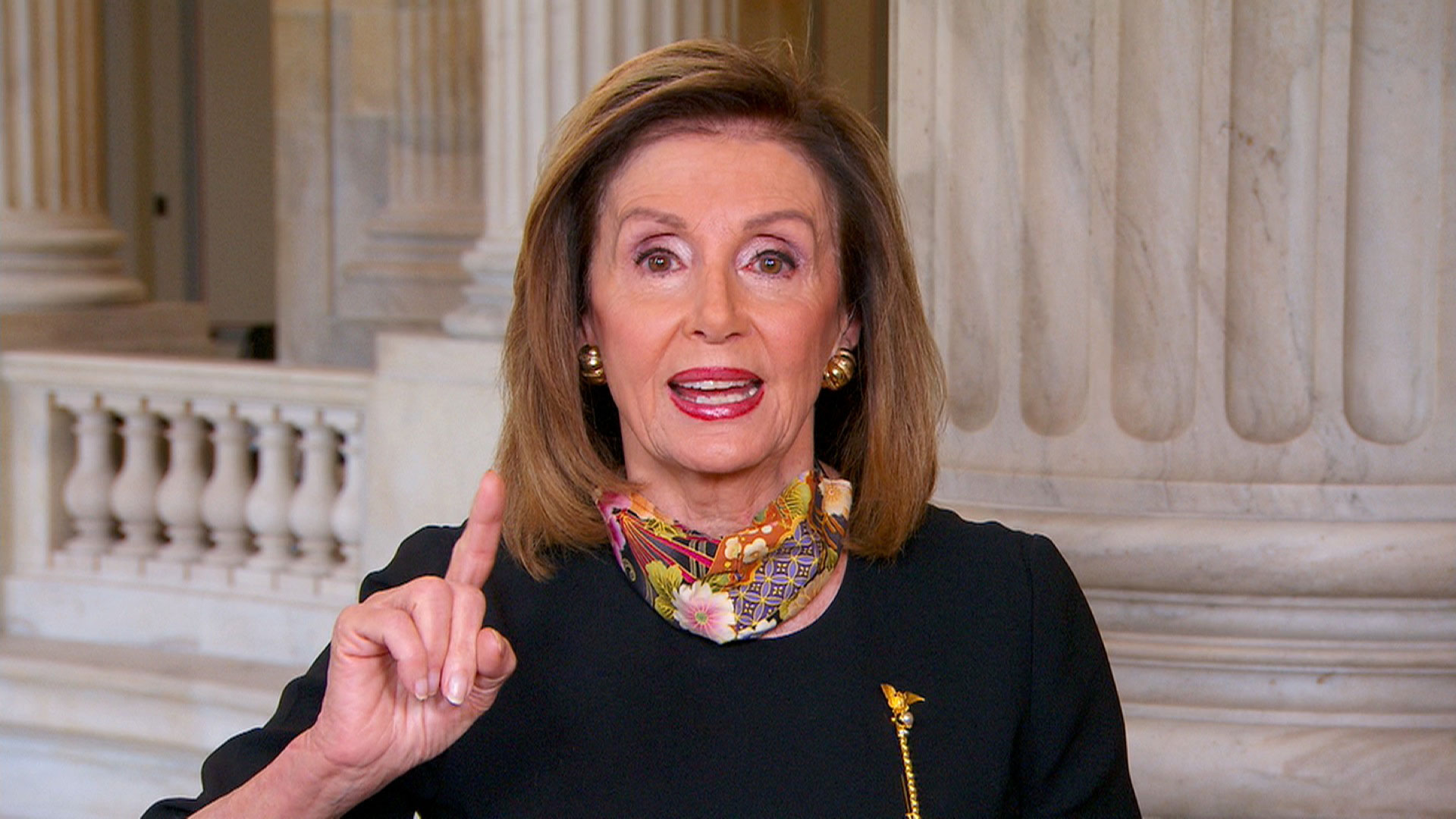 Speaker of the House Nancy Pelosi speaks with CNN on Sunday, September 27. CNN

"That is why he was in such a hurry," Pelosi said on CNN's "State of the Union" this morning.

Pelosi warned that a conservative court could overturn the Affordable Care Act.

"If you are a woman, we'll be back to a time where being a woman in a preexisting medical condition," she said.

She noted that it's the job of the Senate — not the House — to consider and possibly confirm Judge Amy Coney Barrett's nomination.

"It's up to the Senate to make that judgment and have that process," she said.

Some background: The Supreme Court is set to hear oral arguments just after the November election in a case about the Affordable Care Act.

Senate Republicans have indicated they may vote to confirm Barrett before Election Day — meaning she could be seated on the bench for that case.

"Chief Justice Roberts pushed the Affordable Care Act beyond its plausible meaning to save the statute," Barrett wrote. "He construed the penalty imposed on those without health insurance as a tax, which permitted him to sustain the statute as a valid exercise of the taxing power." 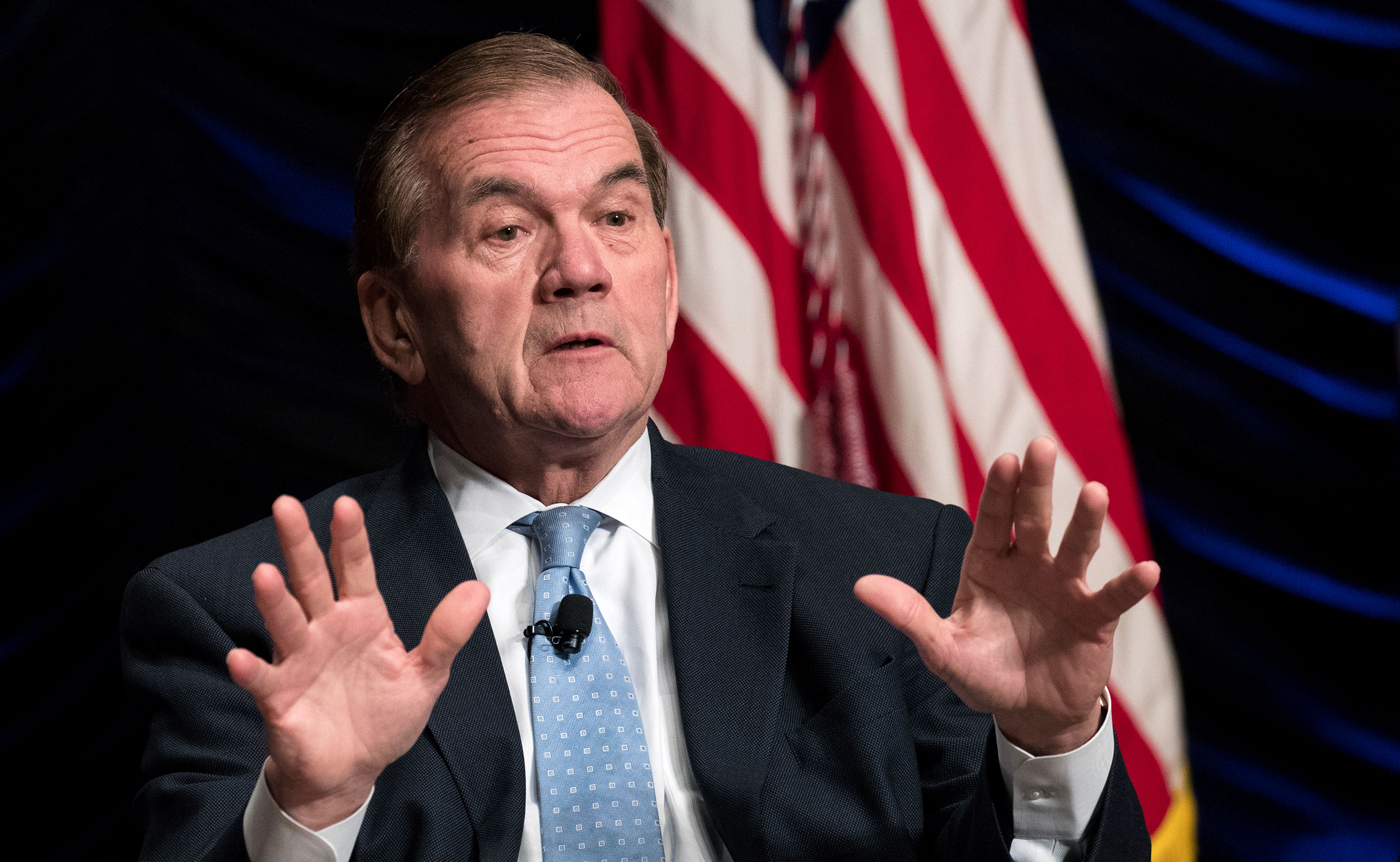 Tom Ridge, former Department of Homeland Secretary during the George W. Bush administration, endorsed Joe Biden in an op-ed in The Philadelphia Inquirer this morning.

“I will cast my vote for Joe Biden on Nov. 3. It will be my first vote for a Democratic candidate for president of the United States,” Ridge, a former Republican governor of Pennsylvania, wrote in the Philadelphia Inquirer. “But it is not the first time I have said ‘no’ to Donald Trump. I urge my fellow Pennsylvanians to join me.”

Ridge offered a scathing critique of Trump’s time in office, including his attempts to cast doubt on the election process.

“With just about one month until Election Day, President Trump continues to claim the only way he can possibly be defeated is a rigged election. Can you imagine the hubris? Can you imagine any other president in our lifetime — or ever — saying something so dangerous and un-American? We are in the midst of a health crisis, when we should be doing all we can to help citizens vote safely, yet he continues to cast doubt on the sanctity of the vote. He’s done so multiple times here in Pennsylvania. It’s deplorable, yet utterly consistent with past reprehensible behavior.”

Ridge noted, “While I do not agree with many of Biden’s policies, I do know him to be a decent man who can begin to undo the damage President Trump has caused.”

As we get closer to the debate showdown in Cleveland on Tuesday, both campaigns have been quiet about how the candidates are preparing.

Trump, according to a source familiar with his debate preparations, is studying expected attacks from Biden. The focus of the preparations are a series of notecards the President is reviewing — the front lays out an expected Biden attack while the back of the card has bullets of what Trump has done on the topic, what he will do in a second term and how to turn the attack back on the former vice president. Christie, who played Clinton in Trump's 2016 debate, is also helping with Trump's debate preparations, the source added.

The first debate, moderated by Fox News' Chris Wallace, will be 90 minutes and focus on six topics:

"The Trump and Biden Records""The Supreme Court""Covid-19""The Economy""Race and Violence in our Cities""The Integrity of the Election."
2 hr 22 min ago

Trump on Tuesday's debate: I prepare "every day"

President Trump told Fox News he thinks he prepares "every day" for the first presidential debate on Tuesday.

In a pre-taped interview airing on Sunday, the President did not elaborate much further on his preparations, adding, "when you're president, you sort of see everything that they're going to be asking."

He went on to tout the economy and claimed his administration has saved "millions and millions" of lives in its efforts to fight the coronavirus pandemic.

The US surpassed the staggering milestone of 200,000 coronavirus deaths this week.